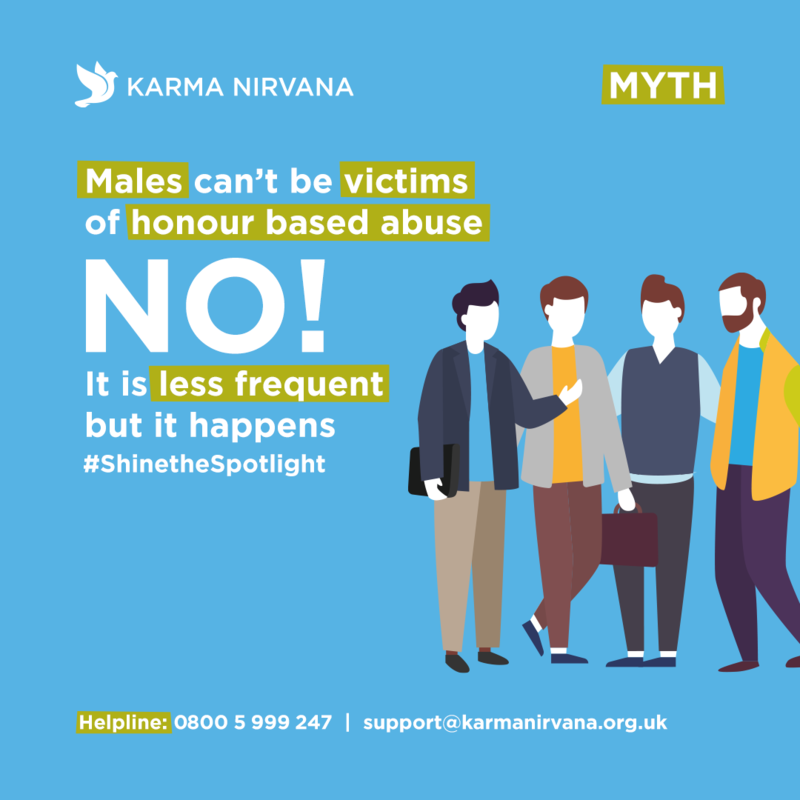 What is honour-based abuse and how does it affect men?

In discussion with Karma Nirvana
Skip to main content

Honour-based abuse is not limited to any one community, but it is most common in communities with roots in South Asia, the Middle East, North Africa and East Africa. It is often reported from Muslim, Sikh, Hindu, Orthodox Jewish, and occasionally traveller communities.

In communities where honour-based abuse takes place, the family’s views of ‘honour’ are considered extremely important and compromising that ‘honour’ can have severe consequences. The punishment for bringing dishonour to the family can range from physical and emotional abuse, to being disowned, and in some cases, even murder.

A survey from Safelives found that victims of honour-based abuse will experience abuse for at least five years before reporting. This is two years longer than domestic abuse victims. While studies show the majority of victims are women, men also experience honour-based abuse in a variety of complex ways.

The Weight of Social Expectations

From a very young age, men in communities where honour-based abuse takes place are taught to be authoritative and macho. Male victims may struggle with accepting that they’re being abused, because of these learned roles.

“There’s a lot of manipulation going on, and I think for men, it’s that they feel trapped,” Anup said. “Because they’re men, they shouldn’t be feeling this way, according to what they’ve been taught.”

Anup explains that families often hold strong patriarchal values, which give men more freedom than women. For example, if a woman were to have a relationship with someone her parents disapproved of, she could be disowned or even killed.

In comparison, many male victims go to Karma Nirvana for help after 10-15 years, with two separate families –the one their parents forced on them and secret one with a partner of their choosing. While they won’t be killed for having two families, the prolonged stress and abuse affects their mental health over time.

“It can come out in different ways, such as Complex-PTSD, to the point where they’re having mental breakdowns because it’s become so overwhelming,” Anup explains.

In addition to marriage, Anup says parents have a ‘checklist’ they expect their sons to follow. They   expect them to follow specific career paths, such as accountancy or engineering. Rejecting those expectations for less traditional paths could lead to abuse.

“I think the biggest trigger with men is sexuality, where they’re gay and their family have found out and now, they're forcing them into a marriage,” Anup said.

Because of that, many victims will ask not to be placed in areas where there may be members of their community, for their own safety. However, placing victims in areas away from their communities may present other risks.

One caller to Karma Nirvana escaped the abuse he had been suffering from his wife, since she found out about his sexuality. But after escaping, he and his children were placed in a city where they then suffered racist abuse.

“Not only was the man fleeing from honour-based abuse and homophobia, he was now also fleeing from racial abuse,” Anup said.

Another man went to Karma Nirvana in his mid-30s after five forced marriages. When he was 18 years old, he told his parents he was gay. After that, they kept him from going to university and rushed to marry him off.
His marriages failed. So, the family tried again, and again. He faced constant physical and emotional abuse because of his family’s views on honour and masculinity.

“In this man’s case, he felt he wasted a lot of his years,” Anup said. “Men need to know, that it's okay to be gay and be from, for example, a Muslim family. This shouldn’t mean they are abused.”

The Manipulation of Faith

Manipulation of faith is common in honour-based abuse. Jasvinder questioned it as a child, but her mother would respond “it’s written,” in Punjabi. When she reached adulthood, she realised her mother had been lying.
That same manipulation is being used to justify honour-based abuse today. Anup says the less educated you are on your faith, the easier you believe what you’re told.

“Faith in these communities has so much influence and dictation on how people live their lives,” Anup said. “Using faith is a no brainer for a lot of these perpetrators, because they know the victims will believe them.”

“I think that's where we see a triggering time, where they'll just return home, because they can't cope with it,” Anup said. “There is a loss of family and mourning for people that are alive.”

According to data shared by Karma Nirvana, only 3 out of the 43 constabularies in England and Wales are prepared to respond to honour-based abuse.

The lack of response from the police isn’t the only issue. Anup explains that a lack of understanding the differences between honour-based abuse and domestic abuse could also prevent support sector workers from giving survivors of honour-based abuse the support they need to continue living freely.

When victims of honour-based abuse make the decision to leave, counselling is essential, but some victims shared how counsellors have asked problematic questions such as, ‘why didn’t you just ring your mum up and tell her how you feel?’

In order to support victims of honour-based abuse, we need to spread awareness and engage with communities. Anup highlights a need for collaboration between charities. Often, cases are referred to Karma Nirvana just because of the ethnicity of the victim, not because they are experiencing honour-based abuse.