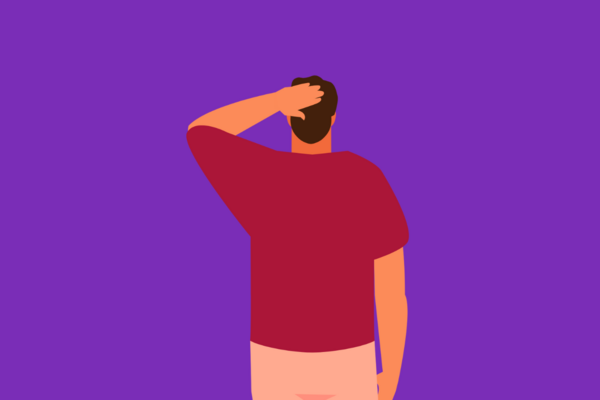 It's Supporting Male Victims of Domestic Abuse Day, a day when we show male victims of domestic abuse that they’re not alone, and that things can get better.

We received the below letter from a male victim called David*, who experienced abuse over the course of two years at the hands of his then wife. Thankfully, David felt able to reach out to a friend, after which he left the relationship and sought out counselling support to recover from his experience.

If you see yourself in David’s story, you can contact our friendly and knowledgeable team of advisors on the Men’s Advice Line. They will believe you, support you, and help you decide on your next steps.

I am writing an open letter to all men, stating that I have been the victim of violent and aggressive domestic abuse at the hands of my ex-wife. I write this so you may recognise the symptoms.

In 2017, I married a woman I’d been with for 5 years. In 2019, at around 8:15am, I waited for her to leave for work, packed my car with everything I needed and left for a friend’s house. I would live there for 6 months while I rebuilt my confidence and sense of self-worth.

I had moved into our marital home a confident young man, an enthusiastic small business owner, a creative musician, an outgoing and energetic sports fanatic and a mischief maker and thrill seeker. A little over two years later a person moved out who I barely recognised.

The first signs of abuse came in the form of belittling. She would make constant corrective statements, introduced house rules to change my behaviour, then made passive aggressive comments if I didn’t conform.

I compromised on how I acted, how I spoke, what I ate, what I watched on TV, when I left the house, where I went and who I went with, what time I went to bed at and what time I got up at. Life became easier to navigate if I just conformed to the expectation placed on me. Anything for a quiet life.

I often described my wife’s mood as a house of cards: a gentle movement away from crashing down. This was a constant throughout our relationship, but it became more severe once we lived together. Over time, it took less and less for her to flip out and spiral into anger as her vice-like grip on my behaviour became tighter. As the restrictions on my life grew more severe, the fear of ‘upsetting the apple cart’ became greater.

When I say control, I’m talking about all the typical things you’d expect: checking my phone, checking my computer, reading my social media conversations.

In the 21 months we lived together my parents were never allowed to visit, her own parents were only there twice. I can remember my best friend being made to sit in the car on an occasion he visited from England. My sick, elderly cat wasn’t allowed into the house either and was forced to live in our small garden shed (even in the snow). I never spent a single Christmas, Easter or special occasion with my family.

My footprint in our 3-bedroom house shrunk too. The small third box room became my bedroom, oﬃce and living room. I slept, ate, worked and relaxed there for six months.

You may be reading this and thinking ‘how does a man end up in this situation?’. It’s a fair question and one that’s hard to answer. These rules and regulations grew and developed over time. I wanted my wife to be happy. I wanted to be enough for her. The line between doing the right thing and doing what I was told was blurry.

I hid myself in work, I worked 60 hours a week at times. I went to work even when I didn’t need to, I stayed behind after shift to eat and drink and watch Netflix.

As our relationship became more strained, I distanced myself. This escalated everything quickly. The change was me beginning to check-out of the relationship. I agitated at the control, I moved from wanting to please her to wanting to escape. Compliance changed to complaint. This is when the violence started.

I’d be treated to barrages of insults, then she’d storm around the house banging doors, then she’d break things. The most memorable instance was the time she followed me to the en suite bathroom screaming so I locked the door behind me. To get my attention she threw the contents of a chest of drawers, followed by the wooden drawers themselves at the back of the locked door.  On another occasion I made Ramen Noodles for myself and she objected to the smell, so she sprayed fabric softener over my plate.

I remember on one occasion arriving home with two takeaway coﬀees to find her annoyed on the sofa. I was standing and she was sitting and after a brief exchange, without me raising my voice, she pulled a blanket over the top of her head and shouted “Don’t you dare stand over me and speak to me like that”. You understand, I hope, that she could play the role of victim much easier than I could, something her own father warned me about in an email he wrote around a month before I left finally the house. “Be very careful” came the poignant warning in response to my cry for help, “the moment you react aggressively to her, she’ll label you as the abuser”. This email left me wondering if there was a history of similar behaviour.

Then the paranoia of infidelity came. To her, the reason I was retreating from her could only be because I’d met someone else, so she sought evidence to confirm. Unfortunately, there was none, so a 17-year-old employee at work became the focus of her rage - she must be the one, she’s welcome to you, she’s working again is she, oh she was there today was she.

Still despite home life being a living hell, I would still make excuses, “Maybe I’m just really diﬃcult to live with” I’d say to my family. I’d close oﬀ when asked about her, I’d give excuses for her absences, I’d retreat from public events or family occasions.

Eventually, it took a night out with a close friend to finally break me down. I’d had a couple of drinks and she said sternly that my business hadn’t been the same, that I’d lost interest in work and that I looked thin and grey. She wanted details and wasn’t taking no for an answer. The answer she got was like someone bursting a dam. When I said it all out loud it sounded as horrifying to me as it did to her. She was shocked, I was shocked, but it was finally over.

The last thing I want to tell you is something that my counsellor said to me in one of our earliest sessions. She asked me why I was seeking counselling. I stumbled on my answer. I knew that I needed it, I knew I had trauma that was still keeping me awake at night, I wanted to be a better person, I wanted to make sure history didn’t repeat itself, I knew I was reacting unnaturally to certain scenarios - but on the counsellor’s couch that first day I couldn’t vocalise any of that.

I told her that I wanted her to tell me that what I’d experienced wasn’t acceptable. She immediately replied, “Was it acceptable?”

I said defiantly, “No, it absolutely wasn’t”

Her reply, “Well there you go then, it absolutely wasn’t.”

If you need help, if you feel stuck, if your natural behaviours are being suppressed, if you are feeling the need to excuse or justify your partner’s irrational behaviour, if you are ready to admit you are being abused, please reach out to someone and tell them.

Don’t be a man about it. For nearly two years I said “anything for a quiet life” - but eventually I did something to live a better one.

If you see yourself in David’s story, know that the Men's Advice Line is here for you. Call the helpline on 0808 8010327 or email on [email protected]